Skip to content
Dobet Gnahoré carries the voice of Africa

The complexity of African music is unrivaled by any other music genre. The roots of it are so deep that they gave beginnings to everything from European classical music to American jazz to just about every urban music genre in this country. The true depth of African music thou is in its topics, in its lyrics and its mission. African music is the music of people who still talk of the things that matter. Very few American artists still talk of social issues, political scene or economical topics in their music. It is hard to see poverty, injustice and real hard work through the prism of bling, hot booty and popping bottles for most kids in this country. Africa as the whole continent is a completely different world. Every infusion given to it by European visitors has caused primarily a negative effect. From decades of white oppressive regime in South Africa to blood diamonds of Sierra Leone, Angola, Liberia, Congo and more, the tribal culture of Africa does not benefit from a different cultural infusion.

The simplicity of African life was disturbed over and again by everyone from Napoleon to Bismarck has tried to monopolize the continent and slave trade planted the deepest roots in Africa for centuries. Even with the help of ‘white money’ from United Nations and various world organizations the social and economic gap between classes is increasing. The poor get poorer. While Communism in Africa never found its roots, the social and economic misfortunes have ruled the continent for hundreds of years. The G-8 may have recently pledged $60 billion to fight AIDS, malaria, and tuberculosis in Africa but human rights activists said it was not enough and did not keep pace with previous funding promises. Africa is still suffering from the influence of the rest of the world in many ways. The U.S. and Western Europe produce two-thirds of all carbon emissions, but they also spend the most to prepare themselves for the effects of global warming. While African nations produced less than 3 percent of greenhouse gas emissions over the last century, they’ve also been hardest hit by global warming and the least equipped to deal with its consequences.

As with many other injustices, music is the best way to talk about it. The words of African singers have talked about everything from the beauty of its culture to the horrors and oppressions that found their place in the everyday lives. Besides the better known names like Angelique Kidjo there are many beautiful inspirational performers who hardly find their way onto the popular scene of American music. African Americans control nearly $800 billion in annual purchasing power in the US nowadays, most that money goes toward overall well-being and entertainment and not as much toward discovering their roots. So it takes near-miracles for an unknown to the US singer to make it into a major US venue.

Dobet Gnahoré is one of those artists. She sings of the poverty on the streets of Africa. She talks of injustices. She talks of the sufferings. She brings her pain to people in 8 different languages and accompanies it with powerful music and wild dancing. Her naiveté is bordering simplicity but truly expresses her ingenuousness and her honest approach toward life. Removing herself from politics she talks of the negative effects of money infusions into her land. She sings of freedom and sings of the urge to change things and the need for something new. The passion she brings with her is only so much more effective and obvious as she expresses herself with no restrain and no holding back.

On her latest album, Na Afriki (To Africa), she does not employ the help of other artists as much as she relies on her G-d given intuition and talent. Her live performances will bring something different. She’ll dance, she’ll over-express herself, she’ll grip the mic as if it was the neck of an oppressor. Her album thou, while somewhat rid of that live show feeling is just as expressive.

Coming to New York recently she sat down with WORDSnTUNES after her performance at Joe’s Pub to talk about her life, her music and her land. 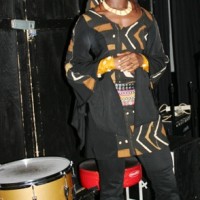 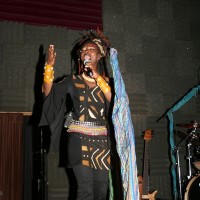 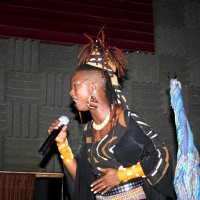 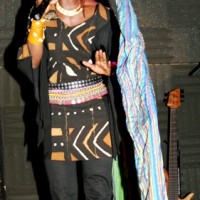 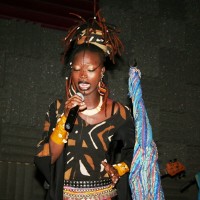 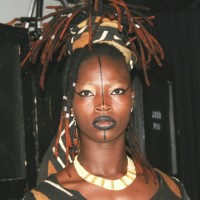