STOMP: there is music in every thing

Music is an art form whose medium is sound. Such is definition of the word ‘music’in Wikipedia. Sounds surround us everywhere thou. What makes the distinction between senseless street noise and an orchestrated melody?

Homo Habilis, the predecessors of Homo Sapiens, who lived well over a million years ago, made music by slapping their bodies. Thousands of years ago, in early Babylonian and other cultures, dedicated music instruments were born. In modern days, instruments like piano and guitar, dominate the world of music.

In the early 90’s there were 2 men in UK, Steve McNicholas and Luke Cresswell, who wanted to give people the gift of music by using everyday objects that surround us. They were believers in the fact that music lives in everything, not only in specifically designated instruments. Thus STOMP was born.

What is STOMP? According to its website: ‘STOMP is performed in theaters, but it is not a play, musical, or opera.’ It is widely known that STOMP uses everyday objects to create music. What made it such a success thou all over the world, from its birthplace in the UK to East Village in NYC?

The only way to properly understand STOMP would be to see it live. From the very beginning of the performance there are random people who come on stage with random objects to make coordinated noise called music, perhaps just like it was thousands of years ago. STOMP takes us to the very origins of music and yet gives it a completely new definition. When in 2010, around the corner from the hippy-like St. Mark’s Place and 2nd avenue in New York, a group of guys and girls pack a theater with an excited crowd 6 days per week, they are doing something right. It’s not Auto-Tune or the wonders of MP3 technology that gathered the crowd. It’s the sounds made by a few men and women, using the most ordinary objects, that made this happen.

The show itself consists of many performance pieces, each representing something different. As the lights deemed and performers came out on stage, they held nothing back. With group and solo acts they used brooms and feet to kick things off. It certainly gives ‘sweeping the floor’ a whole new meaning, as simple household movements and cleaning tools formed into a melody. With fire in every movement of every artist there was no need for words. Mime and sounds replaced spoken word.

The cast of the show represented the sort of diversity that made New York City so famous. Men and women from different walks of life gave life to items rarely deemed appropriate to make music. White, black, Asian and Latin dancers, trained in tap, jazz, classical music, ballet, Capoeira, percussion, theater, film and even graphic design, these men and women breathed life into lifeless objects and gave audience a show to remember.

Choreography of STOMP represents everything but its classic form. With the first movement, the influence of tap dancing on STOMP was evident. There were moves reminiscent of break dancing. Even a seemingly clumsy Asian guy, was anything but clumsy. Chinese ‘drunken fist’ also seems clumsy to an outside, yet it represents a complex martial arts style. There was Shaolin-like dance with sticks performed, as well as an elaborate fighting scene.

Using hand clap, which is still the preferred percussion method in Gospel music, was less unorthodox. Stumping, hitting, thumping, rubbing and doing every imaginable thing to random items, performers were almost like making love to these chaotically arranged music instruments.

STOMP also uses mime generously, from the classic form of pantomime to posing as animals, dinosaurs and making roaring, exclamation and other sounds, while avoiding words. There were monkey sounds and gestures, barking, gun sounds and more. At times it almost seemed like a children’s production, then again, as the expression goes, ‘out of the mouth of babes’ (King James Bible).

Freedom of movement, gesture, choice of items used and more result in freedom of music for STOMP. At times it seems that cast is involved in rather uncoordinated movements, yet it moved as one, simply complimenting each other. Take a better look and you notice an amazing coordination in movements, staying on the same page with each one in a seemingly chaotic performance. There are different roles for cast members clumsy to act out, from the village idiot to the overly detail-oriented lead, and so on.

There was non-stop humor trough smiles and gestures, from playing different roles to rock, paper, scicors with self. Performers were hung at times by ropes, swinging above stage, reminding of stage presence of De La Guarda. At times there were instruments attached directly to them.

There was no need for elaborate props, like wigs, fancy clothing or pieces of furniture. Simplicity is the key to STOMP’s décor. They used pipes, bending them to achieve a different pitch, taking music to its original form, when it was new and exciting. They were simply seemingly experimenting with sounds right in front of the audience. Creating a trash can serpentine, they fiercely waved trash can lids, forcefully banging on them. They performed a Zippo lighters serenade, pulling the audience to listen and see and it drove the crowd wild. Using water effects they created Xylophone-like sounds, with every cast member playing a separate note. Using plastic buckets reminded every New Yorker of Time Square or Washington Park, bringing that true NY street sound.

If STOMP teaches anything then it’s the fact that music is in everything, no matter how trivial it may seem. Random banging on casual objects made random noise but it translated into music for the audience. Call it what you wish. It’s not quite music, but it is sounds; not quite dance, but movement; not quite a play, but what a show!

STOMP is a way to relate to music without defining it. It teaches people to open their eyes and not judge, but see a melody in everything, from random objects to life itself. It appeared like primal instincts a lot of times and yet it seemed like the show was simplifying things by eliminating words to find that new, or long forgotten, sound.

The power of a tiger, the grace of the gazelle, the camouflage of a chameleon, the sounds of STOMP. It is not an organized sound chaos. It is a show to remember. 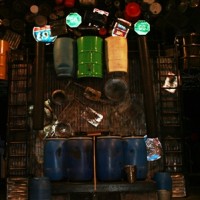 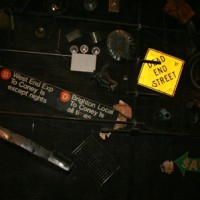 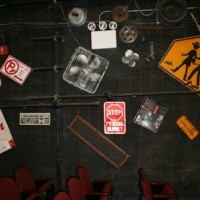 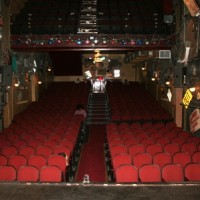 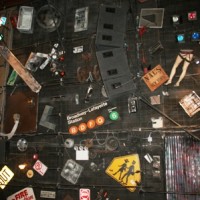 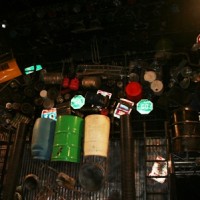 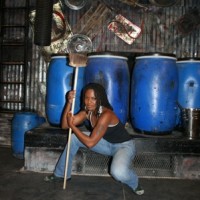 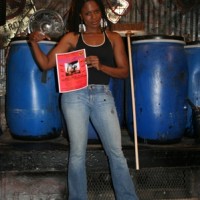 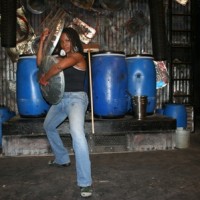 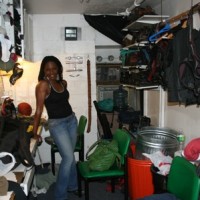 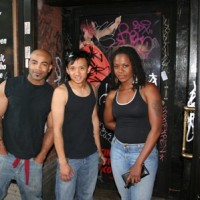 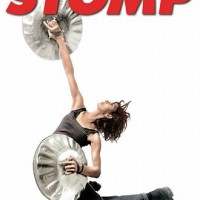