Fantasia Barrino at Apollo and beyond

Italy is famous for its wineries. Germany is notorious for its Bavarian beer and multiple quests for world domination, courtesy of Bismarq and Hitler. France was the heart of art and free thought, from Monet and John Locke it made everyone forget about the mischiefs of Napoleon. China’s wall and its Art of War (or just its art of war) got stuck in people’s minds. The US has its own culture. It’s a culture of business, a culture of entrepreneurial spirit. With a lot of positive sides to it and the fall of the former Soviet Union it stands alone as the ultimate superpower in this world. There are some negative sides to it also, as everything in this life. Making only highly commercial creations, it has certainly had that effect on music. Afterall, it was Prodigy who said F— rap, I’m trying to make CREAM, and that’s that.

In this never-ending chase for money, the art of music has been largely lost. Certainly, there are those old school artists, who haven’t entirely retired yet. Then again, even Busta, with Puff’s influence, began producing club bangers. LL announced: You do it for the gansters, I do it for the ladies, its all money baby. Then years later he had 50 produce his tracks and is talking about leaving Def Jam. Well, Todd Smith (the album) just wasn’t as big of a hit in 2006 as he wanted.
Examples could pour in endlessly, proving the same point. The truth is that it is incredibly difficult to find a true talent, especially when are so many purely money focused artists out there. Difficult, but not impossible!

Fantasia Monique Barrino has amazed people with her vocal skills for a long time. Since she was 5, her church choir days gave her a fresh start. While for most people blood runs in their veins, for Fantasia it was music. Her family’s commitment to the craft has certainly influenced the decisions she made. Her grandfather was a gospel singer. Her uncles recorded multiple albums for Motown. Her cousins sing for Jodeci. Fantasia’s strong spiritual connection kept her singing in church through all her troubles and tribulations. Dropping out of high school due to sexual assault and becoming a single mother at 18, Fantasia embraced it all.

The American Idol appearance increased her audience drastically. Fantasia’s vocal wonders combined with her personal emotional depth placed her on the map in a way very few performers earned. From Elton John to millions of viewers, the North Carolina girl left an amazing mark when she walked off the American Idol stage. From there on, there was no turning back. Her 2004 album went Platinum and her second release is due by the end of 2006. In between Fantasia has put out a memoir, made a number of TV appearances, got 4 Grammy nominations and even stared in a movie about herself. A true phenomenon is what this girl has become with plenty of shortcomings to date. Unable to read simple stories to her kid and still experiencing an abundance of prejudice, Fantasia is taking control of her life. Studying for GED while making moves in the industry she has become associated with a number of artists. From Big Boi to Missy Elliot, let’s not forget about her part in Kanye’s Touch the Sky tour.

In Fantasia’s unquestionable dedication to music as an art form, her concert at the legendary Apollo Theater was certainly a night to remember.
Her range of artistic capability, combined with the amazing sounds of her voice, made an amazing impression on everyone once again. It was a unique experience that packed the Apollo Theater at the opening minute of her show and made people stand up and cheer the moment her sounds began pouring through the mike. Talking of old school music, Fantasia reminisced about her singing in a choir days and promised to ‘take it back’. She did just that. Her voice soaring high, reaching the same heights as when singing gospel back in a church, she offered something divine, something higher and better. The very presence of this marvel offered an uplifting and moving experience, breaking the barriers of possible, while taking different forms. Truly melodic, not just flowing with the music, but making the music flow with the voice, Fantasia remained true to her first stage efforts. She used Gershwin’s Summertime to win the American Idol. Just the same, she won the hearts of her Apollo audience on that night with two other remakes. You Are Always on My Mind (originally by Pet Shop Boys) and Prince’s Purple Rain sounded so different and yet so amazing. Following in the footsteps of Tori Amos, Fantasia changed the music to make it more melodic and slowing down the words to bring tears to people’s eyes.

From small town audience mindset to commercial hits that put her on the map and landed her an opening part in Kanye’s Touch the Sky tour of 2005 to Cotton Club-like acts of testing her voice on the listeners, Fantasia’s music was making people’s hearts break.

Simplicity and beauty of entertainment are genuinely entwined in this confident acting true music lover with an exceptional voice. She cries, she laughs, she sings, she makes people happy… and all without faking an emotion. Making herself seem vulnerable she talks of her own broken heart experiences, being unappreciated by a guy. The theme may be old, but was revitalized recently by Keisha Cole’s I Should Have Cheated and Alicia Key’s Karma. Yet, there is no prevailing theme to Fantasia other than the beauty of her voice. The way she holds down the stage and the entire audience in addition to that is not all. It’s her demeanor, her cool, her passion, her realness. From winning the American Idol to having 3 back up singers in Apollo, Fantasia has plenty to celebrate. Perhaps her baby mama song was pointing more in a commercial direction, but appealing to a wide audience is not an easy job.

“If you don’t believe in yourself, noone will!” Fantasia declares from her own experiences. Uplifting and not at all casual, she is keeping her songs spiritual and about life, reminding of the music left in the 80’s. Many artists are talking about ‘bringing it back’. Yet, they are either stuck in a time warp, ignoring the changes in the market or making such announcements without backing them up. It would appear that Fantasia may just be the right person for the job. Remarkable skills of an artist blended with the utmost dedication for her craft leave no limitations to her game.

At the end of the almost 2 hour show with no opening acts Fantasia was visibly physically and emotionally spent. This overwhelmed girl truly gave it all. Literally being carried away by one of her bodyguards she made no efforts to wipe the tears off of her face.

It’s OK, the show is over for the night. Yet the Fantasia Barrino show of an artist has just begun… 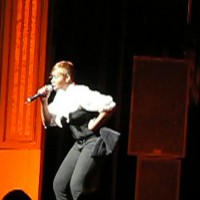 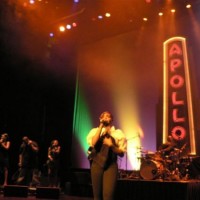 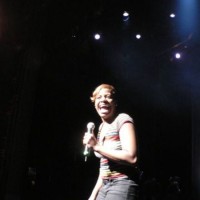 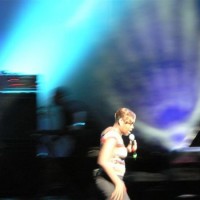